Obsessed with Edinburgh as we are, our Little Black Book wouldn’t be complete without exploring experiences you can easily tick off your Scotland bucket list whilst staying in the capital.

Thanks to Rabbie’s, you can now explore the Highlands in an escorted Highlands day trip, with pick up and drop off in the heart of Edinburgh city centre. Our Features Editor Kathryn Strachan was excited to explore more…

It’s a crisp autumn morning. The kind of morning where the sun gives everything a soft orange glow. The Edinburgh festival has ended so the hoards of tourists have gone home and Princes Street is once again empty.

While I may originally be from America, my heart is Scottish. I love everything about Scotland from the friendly down-to-Earth people to the pub culture to its natural beauty. It is truly a magical place and today I’m about to discover it further with Rabbie’s Tours’ Highland, Lochs, Glens, and Whisky day tour.

Our first stop is South Queensferry (where I’m currently living no less!) to view the magnificent Forth Rail Bridge. The Fourth Rail Bride is a UNESCO World Heritage site as it’s a remarkable example of Victorian engineering. It connects Edinburgh to Fife and eventually the Scottish highlands.

Today we are headed across the water to Perthshire, also known as big tree country. With the bright colourful foliage in full swing, autumn is the perfect time to visit Perthshire.

A Breathtaking View in Dunkeld

First stop in our Highlands day trip is Dunkeld, a little village located on the majestic River Tay. Dunkeld is primarily known for its majestic Cathedral, which dominates the town.

Our driver Dan recommended that we take a walk through the village before approaching the Cathedral. Dunkeld village was built in the 1700s and has quite a few cute coffee shops, bakeries, and other quaint stores. I picked up a coffee at Spill the Beans and then headed for the Cathedral.

The cold autumn air still lingered and the steam from my coffee rose in short bursts as I sat on a bench to admire the view. Not only is the ancient stonework of Dunkeld cathedral beautiful, but when paired with its view of the River Tay the scene is breathtaking.

A Walk in The Autumn Woods at The Hermitage 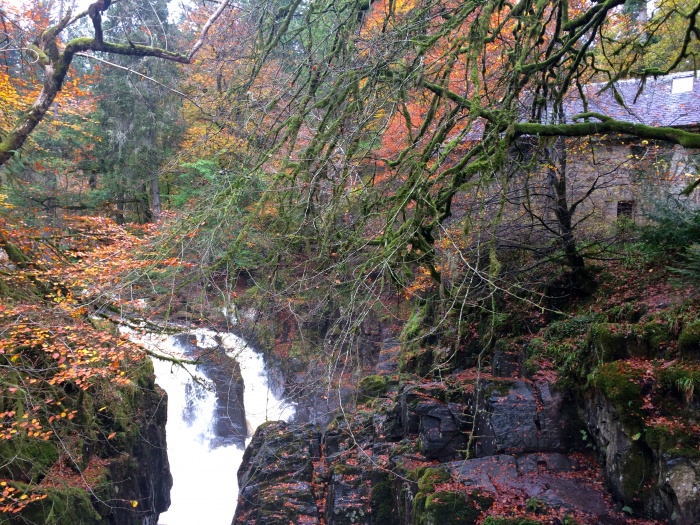 In order to properly admire autumn foliage, a walk in the woods was required. Thankfully, that’s exactly what Rabbie’s had planned. Our next stop was the Hermitage, which involves a short walk through the woods to a dramatic waterfall.

At the Hermitage, the colours were in full swing. My walk to the waterfall took longer than necessary as I kept pausing to admire the foliage. The combination of mist rising off the river, bright orange and yellow colours, an old stone bridge (probably built by the Romans), and a dramatic waterfall perfectly sum up the essence of Scotland.

Travel to the Heart of Scotland in Pitlochry

As we drove towards the Highlands, I could see the mountains looming in the distance. The highlands could be considered the heart of Scotland as they play such a large role in Scottish culture, identity, history, and of course heritage.

When people think of kilt-wearing bag-pipe playing Scots, they think of the people that lived in the Highlands. It would be impossible to say that you had truly been to Scotland without a trip here. While Glencoe and Fort Williams are more iconic Highland destinations, Pitlochry offers a glimpse into the magic that awaits further afield.

Known for it’s natural beauty and proximity to the Highlands, Pitlochry has been attracting tourists for more than 150 years. However, this also means that it is mobbed with tourists during the peak summer season. In fact, I visited in August with my family and found the crowds of tourists almost unbearable.

But, in October, there were few other tourists and we could enjoy Pitlochry’s natural beauty without having to fight for space. Pitlochry is the perfect place for a stroll and, as it was mid-day, lunch.

A Dram to Finish our Highland Fling at Dewar’s Distillery

Any trip to the Highlands is incomplete without a dram of whisky. After all, a whisky dram is a quintessential part of Scottish – especially Highland – culture. It’s also the perfect way to counter cold weather.

Thankfully, Rabbie’s had arranged a special tour of Dewar’s Aberfeldy Distillery in Aberfeldy. This distillery dates back to 1898, when the sons of founder John Dewar, Sr. began production of single malt whisky to go into the recipe for their successful blended Scotch. With over 150 years of whisky experience, Dewar’s Distillery is one of the most renowned and respected Scottish distilleries – both abroad and at home.

Our tour of the distillery gave us an exclusive glimpse behind the scenes of the famous Dewar whisky. Not only did we learn about Dewar’s history, but we also got to experience the distilling process and of course sample whisky straight from the cask.

While I’m still learning to appreciate whisky, it’s a valuable part of my journey to becoming Scottish and my visit to Dewar’s Aberfeldy Distillery certainly helped the process. As they recommend at Aberfeldy, the next time you drink whisky add a small drop of water to help bring out the flavour.

Heading Back to the Lowlands

Our drive through the lower Highlands would have been incomplete without our driver Dan. During our drive, Dan recounted stories of epic battles won in the area, taught us Gaelic words, and explained Scottish culture (both past and present).

As a semi-local, I had previously been to most of the locations we visited on our tour, but our tour driver Dan really helped to bring the locations to life with his wit, humour, helpful suggestions on local places to eat and visit, and of course vast knowledge.

A Word of Gratitude

I cannot thank Rabbie’s enough for inviting me along on this amazing day tour and highly recommend that both locals and tourists alike embark on an adventure with Rabbie’s. With Rabbie’s, you’ll experience true Scottish culture.

Click here for more information and to book your space on the Highland Lochs, Glens and Whisky Tour.