I have to start by saying that this was rather a mixed bag – some delicious food, but a real disappointment as far as vegetarian food was concerned, despite advance warning. 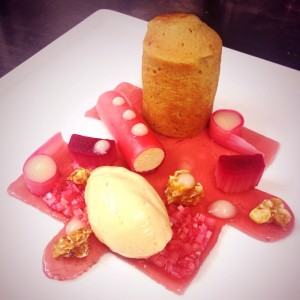 The evening just didn’t start off well. We had a non-drinker among our party who was  very obviously nominated the driver for the evening. Whilst he was circling George Street looking for a parking space two of us went into the restaurant. I should add that we’re not so mean as to leave somebody behind normally – we didn’t want our reservation to disappear.

We were greeted with the normal pleasantries and shown to our table where we were offered the wine list. Because we were a group of five, all of whom have different tastes, the process of making a selection was likely to be somewhat arduous so I simply asked for a bottle of house white and a bottle of house red.

There are no house wines (fair enough) but instead of simply being told this the sommelier disappeared. We were then offered water for the table by a waiter and settled in for the evening. A few minutes later the sommelier reappeared with the wine lists and a selection was made, but I was left with the feeling that I had done something wrong!

The rest of the party arrived and menus were produced – and here comes the real disappointment. The daughter of the vegetarian in our party was rather concerned to see a limited vegetarian selection on the website so, despite my belief that any restaurant of a certain standard should be able to cater for this, I rang in advance and was reassured that options were available.

Given the able, to say it was surprising to see one vegetarian starter and no main course on the menu at all would be an understatement.

We queried this and were told that a medley of summer vegetables was available. All very well and good, but with the rest of the party having such sophisticated and complex dishes I really can’t understand that anybody would feel it’s acceptable to serve a bowl of vegetables as a vegetarian option.

Each of the non-vegetarian food dishes was delicious with well balanced flavours, cooked to perfection and presentation little short of spectacular – exactly as you’d expect from a chef of Greenaway’s calibre – but it only served to highlight the dullness of the vegetarian main course.

Thank goodness pudding is such a great equaliser. I selected cherries with chocolate, which to me is a combination made in heaven. The chocolate flavours were deep and rich, the cherries sweet but with a hint of tang – I’m only surprised I managed to resist licking the plate. The Eton Mess was rich and sweet and the selection of cheeses was well thought out.

Despite the quality of the food and the good company, I was left with a slight feeling that we were somehow a difficult party to deal with. Maybe we are, but I don’t think being a vegetarian or trusting somebody to choose your wine is as difficult as a party could get.

Price for a meal for five, including wine: Around £300.00 including tip.

Since writing the review I’ve been contacted by the restaurant and assured that they are happy to cater for vegetarians and if we were to visit again we would not have the same experience.